Ambiguity. Mystery. History. Those three words define the foundation on which our project will be constructed. However, in contrast to the typical crime-solving structure, it will be a crime-creating game. As the player, you have graduated from Bucknell University and are desperate for work. You have two best friends, Neo, the com-sci engineer, and Christopher, the history major. After following a suspicious series of events, you three are prompted to “follow the whale” and, in doin 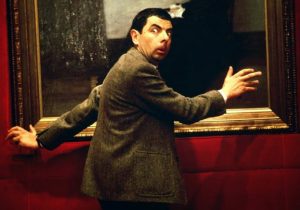 g so, ultimately end up in a gang located in Hong Kong, with a mission to steal a major artifact from the museum. Throughout the game, as you are evading the law and completing dangerous missions, your deeper motivation will be to uncover the true motive behind the orders given to you and the root cause behind it all.

The focus of our game is mainly placed on the series of interactions between members of the gang and authority figures, with the missions being merely background tasks that just help to tie the story together. This relates to the idea in Literary Gaming that “in computer games and gaming as literary art, narrative, dramatic, and/or poetic techniques are employed in order to explore the affordances and limitations of rules and other ludic structures and processes,” (“Introduction,” Literary Gaming). We plan on creating a game that is driven by context and conversation—with suspicion laced onto each action described and an ambiguous motive behind every statement—with stimulating puzzles and secretive missions mixed in. Using terms from Literary Gaming, the core gaming strategy we therefore will use would be that of “cognitive ludicity,” (i.e. cognitive reading strategy), with “ergodic ludicity” (i.e. physical interaction with the software) and “ludic mechanics” (i.e. videogame-inspired technology such as winning and losing mechanics) as secondary forces. Essentially, we wish to involve the player’s mind more so than their keyboard when striving to win.

The greatest benefit of working in collaboration is that of the added creativity and collective skill that comes along with it. From our first brainstorming session, I witnessed the creative spark that spread like wildfire, lighting a myriad of inspired ideas almost effortlessly. Everyone focuses on and notices different things, so by adding other perspectives, you are able to illuminate aspects of the project that you might have otherwise overlooked if solo. However, with new perspectives also comes the possibility of contradicting perspectives, which could end up being counterproductive. Yet, disagreement can allow for further growth by which the best sides of each idea might be molded into a newer and better idea. In our group, each person has his or her own personal flair. My own niche tends to be one concerning the design and aesthetic of something, whereas Neil’s would be in the creativity and smoothness of the story, and given Dale’s experience with Python, his focus would be within the coding. 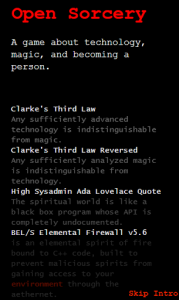 For me, I was greatly inspired by the “Open Sorcery” game I played during class. Despite its seemingly simple structure of providing textual context and then asking for the player choice of response, the compelling storyline added a vivacity that glowed through the unassuming text. It also incorporated riddles as a means of succeeding at a task, which I loved. These qualities are what I wish to construct our game with. Other inspirations for our game include The Matrix, such as “follow the whale” in comparison to “follow the rabbit,” and one of the main character’s names being Neo (which also sounds suspiciously similar to the name Neil).