I believe that the engagement offered by TEI encoding helps you to better understand subject matter. It forces you to pay close attention to the text you’re working with and understand it on a deeper level. 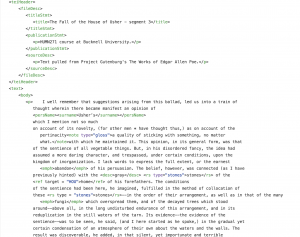 For example, the Poe text had me searching for aspects of the narrative that were connected which turned out to be a difficult process. You have to go beyond the surface level and dive into the text in order to produce meaningful encoding, something that I have never really done nor been good at doing. During the encoding process, I found persName and desc tags to be helpful since it was much easier for me to understand and markup those aspects of the text. These enabled me to process what I already had a grasp of and to decide how to strategize comprehending and encoding the remainder of the text. 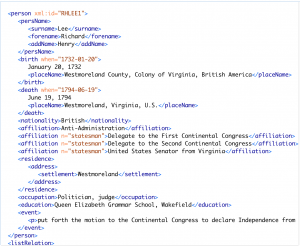 The Declaration of Independence assignment wasn’t as challenging as the Poe assignment since it didn’t have the same focus on deep reading. Instead, it served to provide more background on the people involved in the signing of The Declaration of Independence. I think the ability to markup a person helps provide context to a text. For instance, I gained a better understanding of not only Richard Henry Lee from encoding his personal information, but also colonials in general. Families tending to be much larger and miscarriages occurring more frequently help to contextualize aspects of the times when this document was written. Someone reading this text encoded document can quickly look at this encoding and gain an understanding of someone who helped contribute to the birth of this nation and someone who was simply part of that nation.

Rasmussen’s definition of a co-worker is someone that “seeks to go beyond the user and reader roles, and to contribute actively to the scholarly enterprise.” Under this definition, we have been thrown into the co-worker role and although it wasn’t necessarily willingly, our Poe and Declaration of Independence assignments can be seen as a contribution to the scholarly enterprise. Rasmussen later states that “one must be a reader in order to be able to be a user, and one must be both a reader and a user in order to be able to be a co-worker.” So in our utilization of TEI encoding and embodying the Ramussen’s co-worker role, I believe we were essentially forced into developing a better understanding of the text we were working with. In order for us to effectively encode the text we were working with, we had to work through the levels of reader to user to co-worker in order to gain a satisfactory level of understanding of the material.