For my first TEI assignment, I worked on Poe’s “The Pit and the Pendulum”. I had never read this short story before, and Poe is not the most clear author of all time.  By marking up any type of writing, the encoder will gather a deeper understanding of the text by noticing certain words, researching ideas, etc. Personally, marking up the text while reading it required me to read closer than I would have normally. I defined words that I did not know rather than skipping them over because of the unknown importance of the word. I also noticed how this piece of writing differed from other texts that I had marked up in the past. My section of “The Pit and the Pendulum” was lacking persName altogether, which in other texts is very prevalent. I noticed how common state and trait tags were becoming in my markup. These were aspects that I would not have taken

notice of had I not been the encoder of the text.

The encoder also has the distinct responsibility to decide what will be included in the markup and what will not. As Pierazzo wrote, “informed decisions need to be made on what to include because it is relevant and what can be safely omitted” (Pierazzo, 467). It is up to the discretion of the encoder of what to include, and with “The Pit and the Pendulum” I thought it would be most relevant to markup more state and traits than objects because of the tone of the text.

The Declaration of Independence assignment called on a different side of TEI mark up. This required more research on the part of the encoder than it had with Poe. Due to this, it allowed the encoder and reader to better engage with the text. Prior to my 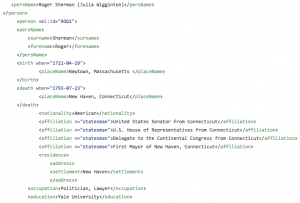 markup on Roger Sherman I did not know anything about him, not even that he was one of the signers of the Declaration of Independence.

Rather than the reader just acknowledging a list of names who signed the Declaration of Independence, they can gain insight into the lives of each man and learn facts such as where he was born and the name of the college he attended. While some of these facts may seem pointless, it is still better to have more knowledge of something than less, and a project like this will make that available.

Ultimately I believe that engagement similar to the ones with Poe and the Declaration of Independence are extremely helpful to better understand the text. As Rasumssen wrote, “reader roles are a function of how we manipulate and interpret an edition’s texts, and so fulfilling each role involves action at two levels: the level of manipulation and the level of interpretation” (Rasmussen, 128). The text is in the hands of the encoder. What they include and what they omit is up to their discretion, but even simply making these decisions engages the encoder with subject matter more intently.