At the beginning, I signed up for a letter that John Blair Linn wrote to James Merrill Linn, which is extremely scratchy and I have no idea what I have run into until  Dr. Jak  acki said that letter is untranscribable and then I had to pick up another “easier” one. It, however, made no difference to me but I still appreciated that. I joked with my roommate that I can barely read an article even if it is printed, but now I have to transcribe handwriting written in a war over 150 years ago. For example the word “concubine” which means mistress appears in the letter but we do not use it any more. This increases the difficulty of transcribing and also Italic that I am not familiar with. It is incredibly frustrating that made me no way other than to ask the professor for help and I started to focus on markups then. 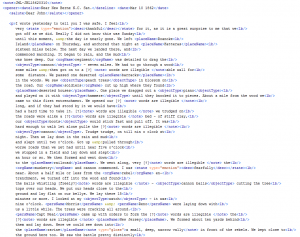 After touching the real letter, I was impressed as preserved so well that I can’t tell it is from 150 years ago if not being told. Personally I prefer the material page rather than the digital one although it doesn’t help that much to me. But when I was looking into the actual page, I could understand why he wrote some letters in specific ways. For example, some letters at the right edge is very squeezed because the paper he wrote on is not a proper rectangle and some part of the paper is destroyed, so we have to guess during transcribing. The material page can always tell more relevant information instead of just text, like smell, texture of paper, ink from the opposite side, etc. However, using  material pages can have some disadvantages like that digital one can zoom in much more than a magnifying glass and is more portable. There is only one authentic work for every antique. If I have no access to it, I would email the person in charge of the Archives and ask him or her to look at some words that confused me. Then based on that person’s view, I then decide whether to check it by myself or not 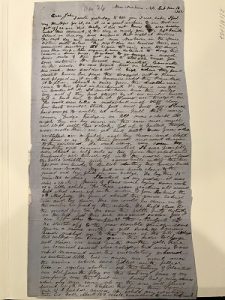 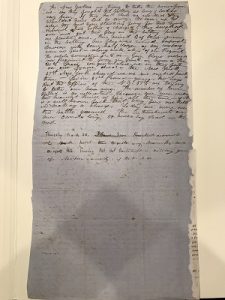 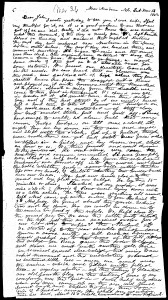 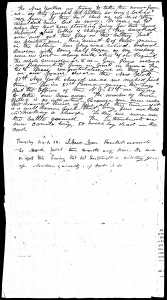 The letter I worked with is James Merrill Linn wrote to his brother John about the the result and the detailed information of a recent battle he took
part in. This is why the former letter he wrote was 6 days before and in that previous letter, he described the weather, clouds, bank of a river and all beautiful and enjoyable nature. While the letter right after 10th of March, on 11th, it aimed to tell John he was safe and no incidents happened that day. Also the letter included more opinion Merrill Linn issued. For example why the battle in North Carolina would be hard to win. What’s more is that he discussed reasons of a southern women association formed which is related to  The Emancipation Proclamation that was signed in September. His feeling changed through the letter he wrote from relaxing  before a  battle, to nervous and anxious because they foresaw a larger battle was waiting for them and this might be the last time for them to hear from home.