The graph above is the culmination of the work that Tong, Iris, and I have done on Linn’s Journals.  The red boxes represent a war.  The first war was on Feb 7-8 and the Union won, you can see the amount of positive things that Linn wrote spiked on the first day of the battle, which was then followed up with a lot of negative thoughts on the second day of battle.  In the time after the battle, there are three days in which there are more negative than positive sentiments.  During the down time between the battles, there is not much neutral analysis done by Linn.  In the few days before the next battle, there is a spike in negative sentiment, but there is no journals written on the actual battle date of May 14th.  After the second battle, there is a spike in neutral analysis, which I take to mean that he is “battle hardened” and is analyzing his situation with less emotion and more factual analysis.  In the down time between the second and third battle there is a spike in positive writing from Linn and in the days before there is a boost in both positive and negative emotions which is understandable because there is a battle that he should be getting excited for, but he has seen many people sick and dying and knows that he can be next.

This is a photo from the Journal.xml file that we marked up.  In this screenshot, Linn talks about the how someone is hungover from heavy drinking the night before.  He also discusses the hardships that he and the battalion are facing.  This is a mainly negative excerpt and is a good example of the types of things that we were looking for regarding negative things written by Linn.  I worked on marking up the middle section of Linn’s Journal, which contained time after the second battle, which was an interesting time in his journal to analyze.  As you can see from the graph, there were many changes in sentiment around this time. 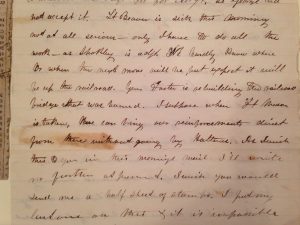 The letter that I was transcribing from James Linn was written to his brother.  He writes about his regiment as well as his own feelings that he is experiencing about the war.  He also requests more stamps from his brother because he was unable to get them at the time.  I notice a general feeling of anxiousness in his letters.  He seems like he is awaiting some closure.  He outright says that he and his regiment are anxious in my letter.  He also seems like he is awaiting closure when he talks of a siege of Camden that his regiment was thanked for.

The first words of the letter were illegible to me until the final day of transcription and there are still many words that I have not been able to transcribe.  “I expected” was read to me as “Sephora”.  This is a great example of the trouble that was had during the process of transcribing each word.  As context built and handwriting patters emerged, more and more words became clear.  What also became clear was James Linn’s story.

Using zoom tools on the computer was not enough.  We set out to the archives to get another perspective on these letters.  Immediately I saw a difference.  There was a crisper, more readable letter that I was able to hold in my hands.  I was able to lean my head closer or further away to get a better look at a word.  I could use a physical magnifying glass to look at each word individually as well as reread the letter a few times to look at the context.  One of the biggest discoveries that I made were recognizing words such as “that”, “their”, and “them”.  I struggled to identify these words an awful lot until we went into the archive and looked at the physical letters.  Once I recognized these words, I was also able to distinguish other words that contained a “th” in it from those that did not.

I think that if the Linn archives were not at Bucknell, I would have had to make a much larger effort to transcribe his letter.  I may have had to do some research into handwriting analysis and collaborate with other transcribers to understand the process.  The archive allowed me to skip that extra work, which I think is good because it is more efficient to have done it this way because I only needed to transcribe the one letter. 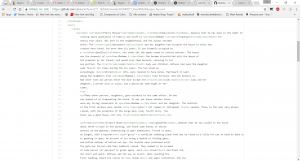 Before the Poe and the Declaration of Independence assignments, I had some experience with TEI encoding, but was not too sure about its applications to real texts.  I quickly learned that it was a great way to organize text by using tags.  When I began the Poe reading, I was struggling to understand the story.  I had a hard time distinguishing characters and places from each other.  I was forced to go back and read the whole story.  As I did this, I noticed that I was reading in a different way.  I was creating a mental map of the characters and places involved.  I took note of things that I normally would not have taken note of such as states, traits, occupations, and other descriptive words.  I think that TEI allowed me to see what Poe intended the reader to see.  Characterization and details were very vivid and I felt a much deeper connection to the text than I would have if I had not done TEI on the text.  I mainly used desc tags along with state, trait, occupation, and persName.  I think that these were most helpful in allowing me to organize the text for my self. 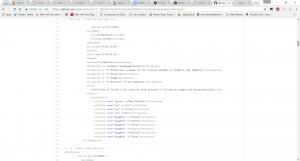 The Declaration of Independence assignment was a fun assignment for me.  I was assigned Josiah Bartlett as my subject.  I felt as though I learned a lot about him and I was impressed because I had not heard of him before this assignment.  Using TEI to simplify his life, family, and political events was a cool way to organize all that he was as a person.  I am sure that there is way more to him than the records show, but it made me think about how my own encoding would look and I compared myself to him a little bit.  Although this TEI was doing a different task from the TEI in the Poe assignment, it still created a more organized picture for me.  The only thing that I did not like about this assignment is that my work was all deleted after I had made a lot of progress on it in class and I had to redo it all and forgot some key aspects that I had included in my original version.

Our text adventure will be one that allows the user to choose their own super power and use it to go on an adventure.  The super powers will be the gift of flight, super strength, or invisibility.  This will allow the user to go down three different paths.  The narratives for each journey will be different.  The flight super power will require the user to complete a trip to Russia to steal a prized government possession that is hidden atop a mountain.  The super strength power will entail a fight against terrorists in California.  The invisibility cloak will lead the user on a path to steal important government documents.  We will use probability in our code to make the game both structured and random.

Our idea to give the user three different options was thought of after we did the reading by Rettburg.  He talks about using collective knowledge as well as collaboration in literature.  There can be one author writing one chapter and another author writing the next.  This leads to a different type of story for the reader as it gives them something to look forward to as well as adding nuance to the syntax.  We are doing this by each creating our own branch of the game.  All of us will have a different interpretation of the journey that the characters will undertake, which will lead to a different experience for all the players. 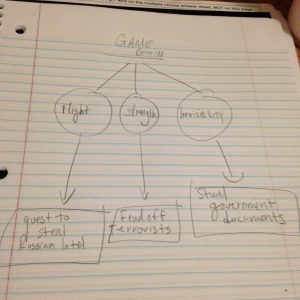 The photo to the left is a very simple map of the direction that we want this adventure to go in.  We plan on making each different story as intricate as possible to make the code that we use something that the user doesn’t even think about.