The final leg of the Linn project turned out to be more exciting than I anticipated. Jingya and I were tasked with creating visualization(s) by analyzing Linn’s diary entries or letters. Of course, every visualization needs some underlying data, which in our case was Linn’s personality data. A major part of our challenge was to figure out a way to generate this data from his diary entries. Jingya and I thought we could employ existing web Application Programming Interfaces (API). In layman’s terms, an API can be defined as a package of rules which when given an input produce desired outputs in a structured format. In our scenario, the input was the text from the journal, whereas the output was the personality data associated with the text.

We started off slowly because we could not find a freely-available API which met our needs. We eventually stumbled upon IBM Watson’s Personality Insights Service. As stated on their website, “Personality Insights extracts and analyzes a spectrum of personality attributes to help discover actionable insights about people and entities.” This API was what we needed; however, we were required to use a server-side technology called node.js, which neither of us was familiar with.

My primary task then was to set up a skeleton node.js application. As I soon discovered to my disappointment, node.js being a server-side technology does not have access to the text displayed on web pages. So I wrote a script (shown below) to store the text which I could easily feed into my node.js application.

Once I had access to the text in a readily parsable format, I used node.js to make API calls to retrieve the personality data for each of Linn’s diary entries. Initially, I was skeptical about the number of API calls I would be allowed to make with the free-tier subscription. Fortunately though, I was able to make enough calls to test my application and store the needed data as a JSON file. Jingya is using this data to create a dynamically generated visualization using p5 and (or) d3 .

My experience while working on this project was fascinating. I got to learn about a well-established and popular technology, which I did not think I would at the outset of this course. I think I did a fair job at familiarizing myself with node.js and the Personality Insights API. However, I could have saved myself some trouble had I read the Node.js documentation carefully. I tried a few hacks to access the web page content, but could not find a way around. Overall,  I have picked up valuable skills such as transcription, text encoding and analysis over the course of this project, and I look forward to applying them in my future endeavors. 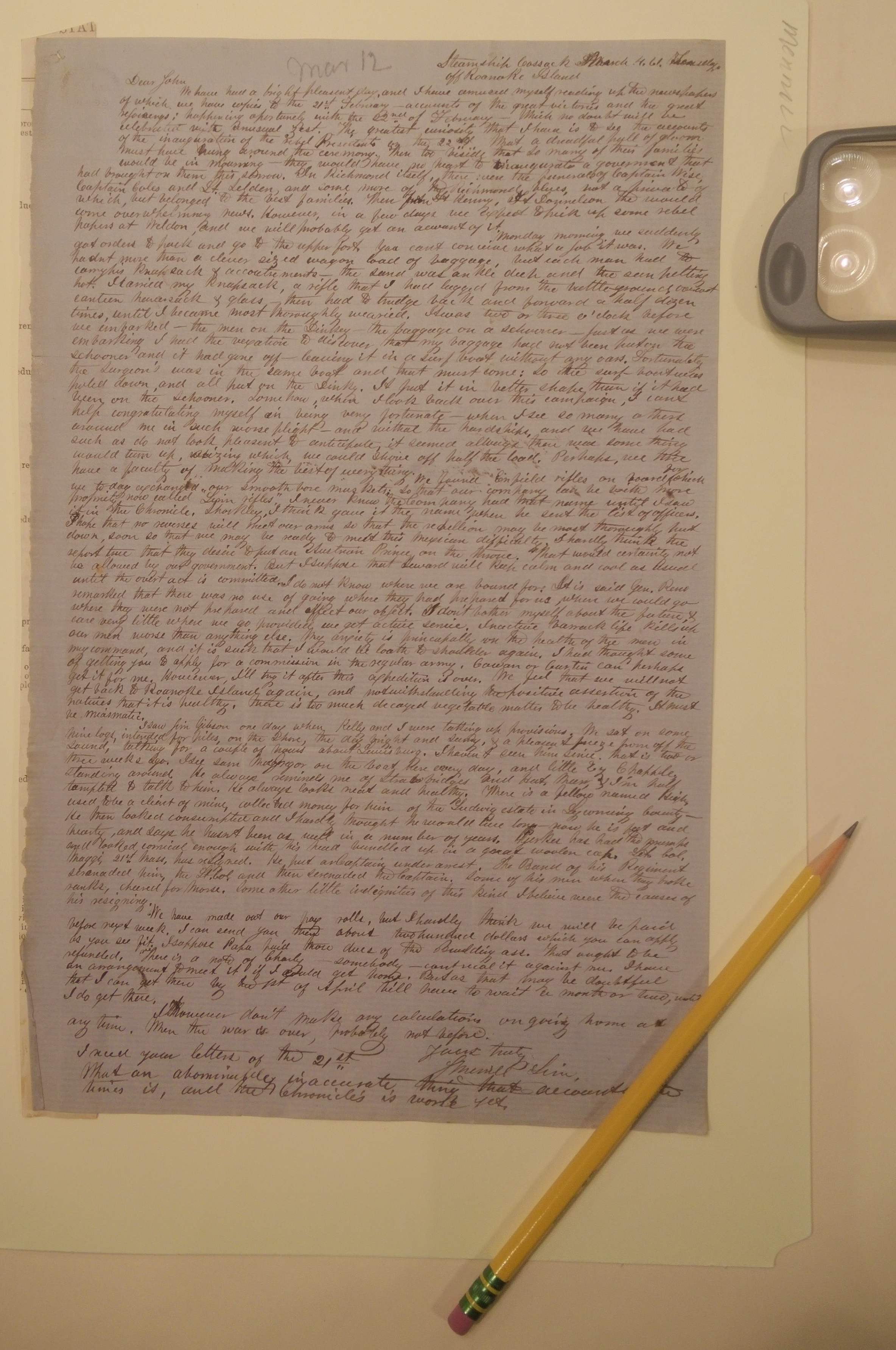 As part of one of the most challenging assignments I have done for this course, I transcribed and encoded a nineteenth century letter written by James Merrill Linn to his brother John Blair Linn. The assignment differed from the other ones because I had to transcribe the text before I could even start encoding.

When I began the transcription, I did not realize that the process would require a day’s worth of effort. Contrary to what I anticipated, I had to go through the letter many a times, each for a different purpose. Sometimes, I would discover a distinctive aspect of J. Linn’s handwriting, such as his peculiar style of writing an ‘x’, which would compel me to review the transcribed text all over again. Nevertheless, I did not feel frustrated, but I wish I had chosen a shorter piece.

I referred to a few of his letters to better understand his handwriting; however, his handwriting varied notably. One of the resources I found helpful was OneLook Dictionary Search. This website allowed me to search for words using wildcards, as a result of which I was able to figure out words even if I was unsure about few of their characters. I also encountered misspelled words which I chose to leave as is because, as an editor, I felt people would be able to spot the errors and understand the context.

I was fortunate enough to be able to visit the Archives and physically see the manuscript. I noticed more features of Linn’s handwriting, especially his way of writing an ‘x’. Moreover, I found words which I could not have figured through the digital facsimile regardless of however much I had magnified. Transcribing using the facsimile was troublesome because I could not see the already transcribed text immediately. On the other hand, the paper version allowed me to quickly review the features of the handwriting I had already found and make a judgement on the transcription.

The text-encoding portion of the assignment required comparatively less work because I knew how to use various tags after having encoded Poe’s text a few weeks ago. A quick start enabled me to do more sophisticated markup, but I still had to scan the entire text whenever I stumbled upon new tags such as <objectType> and <measure>.

In his journal, Linn has a relaxed tone and vividly talks about seemingly extraneous. He once comments on the weather by writing, “…there was the richest tracery in scarlet and vermillion, and above in the dark mess of clouds one open spot golden hued.” In both his letter and his journal, he discusses the major happenings of the day, but does not mention how uncertain his life is in the journal. This is surprising because he repeatedly hints towards the uncertainty in his letter. Perhaps he is more comfortable being vulnerable when writing to his brother as opposed to the public.

The purpose behind the previous two assignments was well met, and I now acknowledge how difficult, yet rewarding, text encoding can be. For the first assignment, I encoded the first segment of Edgar Allan Poe’s The Fall of the House of Usher. Initially, I thought I would be able to markup the text just by scanning one sentence at a time. Soon after I began did I realize that I could not do sophisticated markup without first reading the entire segment. As I started adding tags after first reading the text, I could see how different pieces of this segment fit together.

For instance, I found using <trait> and <state> tags tricky, and I could only use them appropriately once I read both the text and the TEI P5 documentation. In my opinion, text-encoding is an iterative process which helps you truly understand the content. Ideally, you are scrutinizing each line to see if there is any possibility to add useful tags. Such a process even fosters research out of context. As an example, while doing the Declaration of Independence assignment, I had to look up websites other than Wikipedia to know more about the person I was assigned – Francis Lightfoot Lee. Even though the assignment had little to no reading, I read another article to best encode the personography, primarily <event> and <relation> tags, of Francis Lee.

Throughout the process, I kept referring to the following statement from Elena Pierazzo’s paper A rationale of digital documentary editions:

Secondly, if every editor necessarily selects from an infinite set of facts, it is evident that any transcription represents an interpretation and a mechanically complete record of what is on the page.

I glanced over how students had encoded other segments of Poe’s text, and realized how different the markup would have looked if it were done by someone else. Every editor has a unique style, and without establishing a strict standard as a team, a single text cannot possibly be marked-up the same way by two editors. While researching out of text, editors can derive their own meanings. Since there are boundless ways to encode text using TEI, different meanings may lead to “fundamentally incomplete and fundamentally interpretative” (Robinson and Solopova, 1993, p. 21) versions of encoding. At first, I was bogged down and could not decide the point where I should stop encoding. But then again, the only limits are “the limits of the imagination.” (Driscoll, 2006) So I went to bed.

In addition, I particularly connected with Rasmussen’s discussion of various reader roles. (K. Rasmussen, 2016) In relation to my work with Poe’s text, I acted as a reader to “understand the work in and through the texts of a scholarly edition” as well as a co-worker who “[took] part in the editorial work at some level.” However, contrary to what Rasmussen believes, one may not necessarily be both a reader and a user to be a co-worker. In such a short span, I did not function as a “user” because I did not focus on “other texts [segments] that explain or relate to the work,” i.e. The Fall of the House of Usher. While dealing with the second assignment, on the other hand, the distinction between my roles as a reader was a bit vague. I could have been playing the role of a “contributor,” not fully knowing the original work but still contributing to the project.

After brainstorming for a bit during class, our team of three rejected the idea of developing a text-based Sherlock Holmes thriller. It was too cliché according to us, and after much thought, we decided on a game, central plot of which is based in a locked cabin. A player finds himself trapped inside a coffin, his hands handcuffed. Is this too dark for you already? Wait for it! He gets out of the coffin only to find his helpless friends across the transparent walls. The time has already begun, and if he does not act fast enough, his friends are going to die in the weirdest of ways. But what if he turns out to be a self-absorbed person? After a certain period of time, a dragon enters the cabin and eats him alive.

Initially, the player would need to move the coffin to find a key to unlock the handcuffs. Our team is figuring out the details of the story. This is where working collaboratively proves to be an advantage. Each one of us has read or watched related works, such as The Exam and the best-selling thriller And Then There Were None, which has helped us think about our plot right from the onset.

For further motivation, Tong is looking into existing room escape games on various platforms, such as mobile applications and web-based 3D games. Her critical thinking ability is greatly valued, and alongside Julia, she plans to sketch the storyline, set up puzzles, and determine the player’s superpowers, if any. As a Computer Science & Engineering major, my objective is to gauge the feasibility of our design, build a minimum viable product (MVP), and see if advanced features can be incorporated successfully. In addition, Julia will oversee our progress and critique the project as and when appropriate. I think our biggest challenge while working as a team would be finding time to meet, given that all three of us have packed schedules.

So far, our work resonates with the writing process of The Unknown in which the authors “began with a general scenario, but … there was little conscious agreement about how the plot(s) might proceed.” (Rettberg, S., Stories and Storytelling in the Digital Age, pg. 192) Nevertheless, we agree to review each other’s contribution to get a sense of the “context” before proposing any changes. As we look at other similar games, we try to decipher what designers of these games have encoded for their players. In the process, we may draw parallels with how we envision our game to function, and “in turn generate crossover fiction.” (Thomas, B., Harry Potter Fanfiction and Narrative as a Participatory Process, pg. 212) This is especially fascinating to me because we are acting as reviewers and authors (or designers) of texts simultaneously.