Neil and I were apart of the Editorial Staff regarding TEI markup standards and revision. Our goal was to refine the markup in a way that focused on the clarity, consistency, and effectiveness of the tags themselves. For example, we found a limited use of the tag <roleName> surrounding terms like “Capt” or “Gen”. However, when it transferred to the extract file, it did not include the context of whom it was referring to, and it was not used consistently throughout the journal, therefore it proved to be neither clear nor consistent so we dropped its use. Instead, we kept the role titles within the <persName> tag. Yet, even so, we still found variation in spelling of certain names as well as a general ambiguity as to who each person referenced was. Therefore, we collected all the extract data under the tag persName, organized it, and researched civil war records to determine whom Linn was referring to. Then, we created TEI ID tags, such as #CGS for Captain George Shorkley, to include more information like birth, death, full name, and position on the names that were most referenced. This helped us find true spelling for names as well as provide a clearer and more in-depth understanding of the context Linn was writing about.

Going through the text further, we found insufficient use of tags like <name type=”event”>, used to describe weather or meals, and the <trait> tag, so we decided to remove them given their inconsistency and general inapplicability to the rest of our project. We also decided to add a tag that we saw wasn’t being used, <orgName>, to describe army groups or other organizations, which otherwise were mislabeled under <persName>.

We found the need to add specificity to certain tags as well, such as what we did with the TEI ID tags, but instead using “n” within the tag. For example, to specify certain places, like Roanoke, we used <placeName n=”Roanoke Island”> to clarify. Also, we decided to add use of n=”pers” and n=”weather” under the <state> tag, to clarify between the descriptions of emotional or descriptive state, and the state of the weather. Finally, for objects, we used <objectType n=“boat”> to indicate which were ships or boats.

Individually, after we made a decision of our overall goal and set the TEI standards, we split up the work accordingly. Neil would individually revise the TEI markup detail throughout the document, while I wrote the statement explaining our decisions and goal as the staff. Then I took the data from the persName extract to determine the identities and correct spelling of those mentioned using Civil War databases, and then I created and defined the TEI ID tags that Neil then applied to the document. Together we discussed whether certain terms should be included under certain tags and we each double checked spelling and formatting of the document when we finished.

This is a screenshot of the excel sheet that I used to organize all the data I collected of each identity from different Civil War databases. 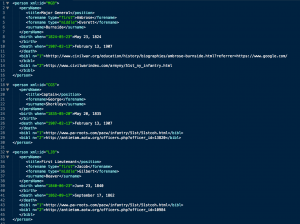 After determining which of the names were used most frequently, I created and defined TEI IDs for each, including information like their title, full name, birth, and death.

I found this project to be a culminating experience, where the whole class worked together to finalize not only a topic that has been the focus of a large portion of this semester, but also by having each of us use skills learned throughout the semester. My favorite part, however, was knowing that all of our work will go toward something larger than the class itself, a unique history that hasn’t been touched by any other institution but ourselves. This unparalleled history is the key feature of this project and I am so grateful to be apart of the process.

For our final project, we, Julia and Sarah, worked on previously transcribed diary entries from James Merrill Linn’s 1850 diary. Using Oxygen XML editor, we were able to mark-up the diary entries with TEI. Sarah marked up the first half of the diary, while Julia marked up the second half of the diary. This was an interesting choice because in this class and HUMN 100 we focused on Linn’s diaries and letters from his time in the Civil War. There was so much to mark up in just the diaries we chose, but we decided to focus on the people. We chose to do this because in his letters and diaries about the Civil War, he did not write about many people very often.

Our work is an interesting addition to the Linn project that the whole class is working on. The majority of the project is on his time fighting in the Civil War, but we wanted to add a different aspect to it. People who look at our website need to realize that this man is not just a Civil War veteran! He grew up in Lewisburg, and graduated from Bucknell. He had a life before he fought in the Civil War. Some people may think that his life during the war was much more interesting, but his life before was intriguing as well.

We extensively marked up his diary of 1850, while also becoming more and more interested as we dug deeper into the analysis. We noticed a couple disturbing stories that Linn wrote about, including a murder of a baby. Also, Linn documented much of his social life, which was an amazing opportunity to learn more about the social life of people our age during the 1850’s. One of the recurrent themes that Linn wrote about that was similar to his Civil War diary is his meticulous attention to the weather and its documentation in the diary. Linn never fails to write about the weather happening wherever he is. Another aspect that we became more aware of was Linn’s preoccupation with other religions. We are not exactly sure what religion, if any, that Linn identifies with; however, Linn writes about his experiences at many different religious affiliations, including Methodist and Presbyterian meetings.

Of course, subsequent “7” became easier to identify. Another aspect of the project that posed some difficulty to us was that the original transcribers failed to produce dates for the entries. After some digging up into the original documents, we were able to identify the dates for the diary entries. Shown in the image, we were originally using transcribed material that was lacking in dates and line breaks.

We seemed to work really well on this project. We are both familiar with James Merrill Linn through our first DH class and each of our independent study projects. We tended to agree on the types of semantic markup that we wanted to do, and our interest level in Linn is very similar. We think that our joint markup of Linn’s 1850 diary was a success.

This reflection post and comment sequence is expressly attached to the submission of your Module #3 assignment. It should therefore speak directly to that experience, and address this question: How has the experience of transcribing and encoding the letter (or letters) that you have done affected your understanding of James Merrill Linn’s experience in the Civil War? Use the following in your post:

Give TWO categories for your post: “Reflections” and “Reflection #3”. These categories are crucial to organizing how readers will find your work.

As we’ve discussed in class, TEI encoding offers a kind of close reading at the same time that the encoder is negotiating the text. You’ve already experimented with diplomatic and semantic markup in different ways (Poe assignment), and with the connection between texts and paratexts (Declaration of Independence exercise). Based on those experiences and your reading of Pierazzo and Rasmussen, do you believe that this kind of engagement with text helps you to better understand the subject matter? This is a yes or no question – there is no wrong answer.  But while I respect your opinion, I expect you to support your answer with evidence and examples. Therefore, in your reflection post:

Give TWO categories for your post: “Reflections” and “Reflection #2”. These categories are crucial to organizing how readers will find your work.

“Build Your Own Text Adventure”

Many of us have experimented with writing short fiction (stories, poems, plays) for a class or for fun. Many of us have written computer code of some kind (programming, to engage in text encoding or analysis) for a class … and some of us for fun. But I expect that most of us have not found a way to combine the two, and that is what the “Build Your Own Text Adventure” assignment is meant to do – give us the chance to experiment with fiction, games, puzzles through code scripting.

In your reflection post, you will consider your progress with your team in developing your project. Include information about and consider these issues in your post:

Give TWO categories for your post: “Reflections” and “Reflection #1”. These categories are crucial to organizing how readers will find your work.