The first part of this module is to decode Linns’ manuscript. Our group started with a very long James’ letter. In China when teaching English, we learned only Italic in class. Although personally I know some cursive, it’s still very difficult to recognize those words. For example, it’s very difficult to distinguish ‘c’, ‘u’, ‘v’, ‘e’ and ‘o’. It’s hard to tell between ‘b’ and ‘lc’ as well. Sometimes we need to combine with the context to guess what he was writing about. For the later individual part, I got a mostly transcribed letter from James’ brother John to James. Even if I was given the mostly transcribed version, I have no idea why the word is transcribed as such. It will be really interesting to sit in a library and spend all day just try to decode the letter for myself, but as an assignment it becomes a frustrating experience. I tried to get some idea from his other manuscripts, but it didn’t help much. 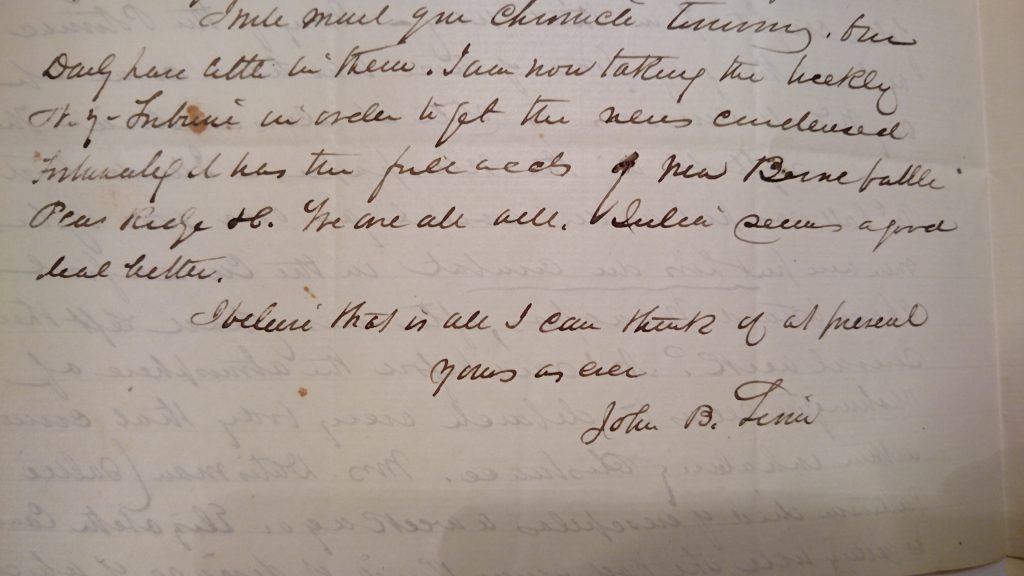 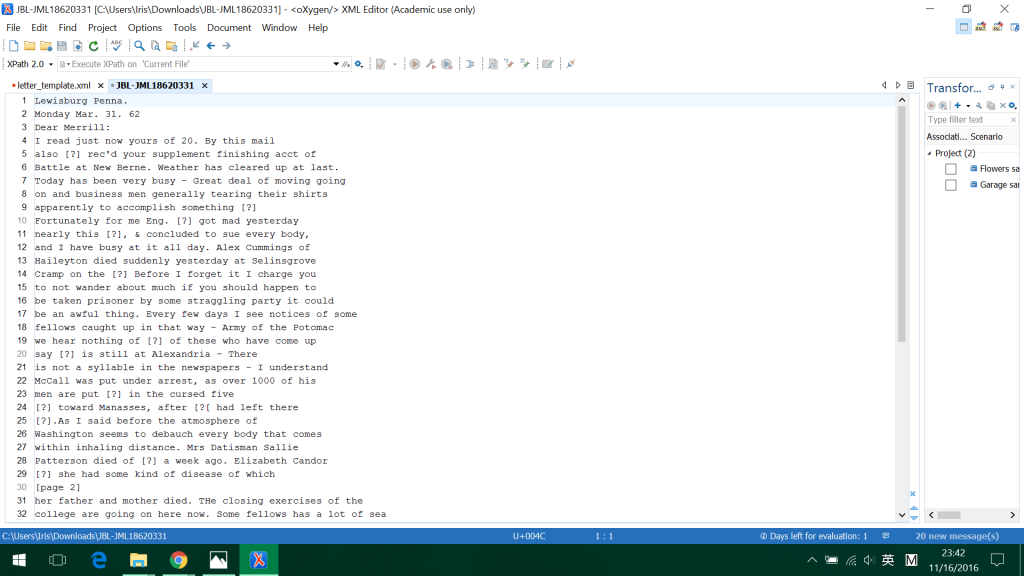 I love the archive experience. On screen the letter has a pale background, but when I actually looking to the piece in the archive, it’s different. It’s written on a brown/wooden piece of letter paper with lines on it. It was like my answer sheet in high school. Although I cannot fully recognize his hand writing, it’s really beautiful maybe even as an art piece. You can feel the history through the steins and the color of the paper. I think it’s easier to read for me. On the computer screen I always try to magnify the word a little bit more to try to recognized the word, but it’s not helping. In the archive I was even able to recognize a word that I had no idea before. This might be because I was reading the letter as people at that time did, which gives me a sense of the bigger picture of the letter. With a vertical screen, it’s hard to tell which part I was working on, but I can work with the digital version anytime I want though. The more I want to focus, the less information I get. 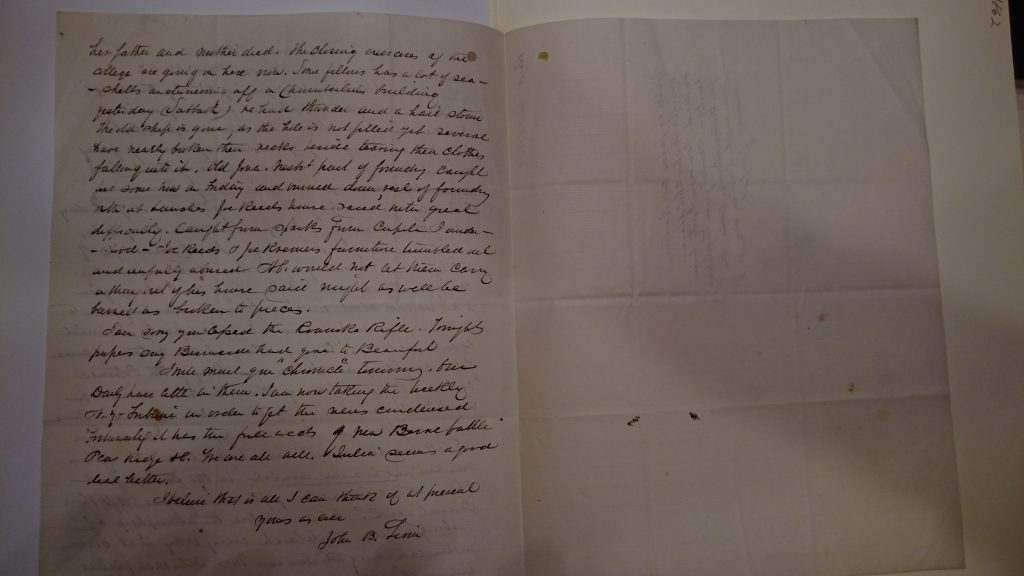 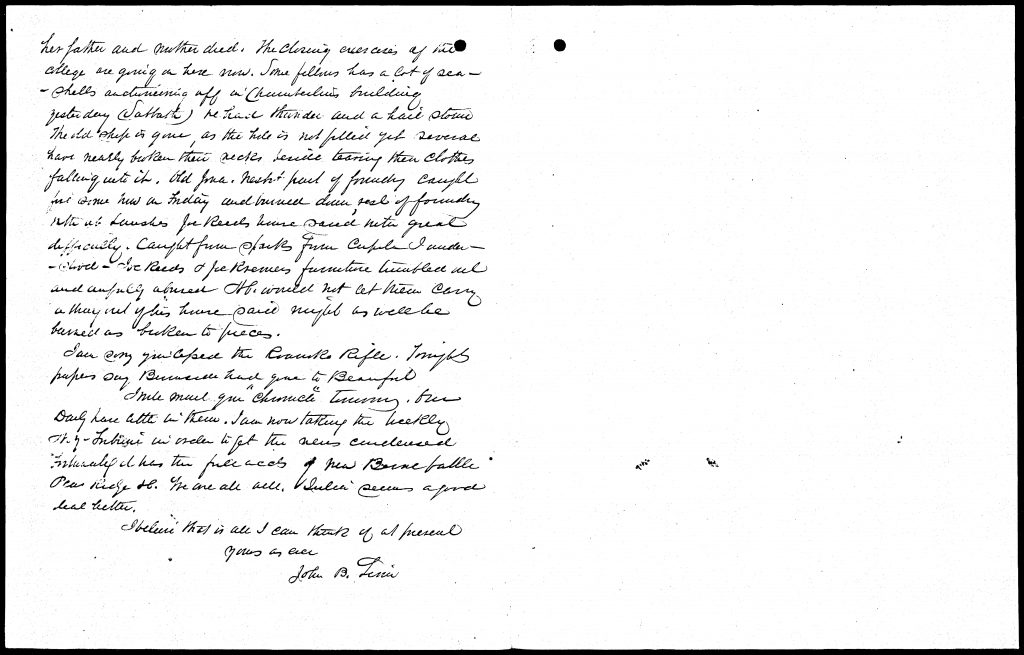 Since my part of the letter is John’s letter to James, the content is not related to what James wrote in his diary. However, when I was trying to write diaries in elementary school, I would elaborate on who is present, what time the thing is happening and what has happened since diaries are for teachers to read.   If the diary is for my own, I would write things less detailed but write more about my feelings at that time. James used a lot of “we” without directly pointing out who the persons are and didn’t say much about his own feeling (it’s like I can’t feel his emotion from his words) but more about what has happened may suggest the audience of this diary might not be his future self.

For me, I’ve never heard about Linn before this mark up, and knew very little about American history.  Doing those markups and transcriptions makes me feel like I was part of it, like his family or acquaintance from Lewisburg was reading the letter he wrote from the front line.