This is the first time for me to actually read and even to transcribe a manuscript. As a non-native English speaker, it is particular difficult for me to understand the writings. For instance, when I don’t know a word, there is no way for me to figure out the handwriting version of that word. This happened very frequently when my group was doing the first transcription together. In addition, there are many person names and place names, which made the process even harder and more frustrating. During the group transcription, I relied a lot on the other group members, and was obviously slower than how they were moving forward. When I tried to do my own transcription, I had to look back to the transcribed letter that my group did in class and compare to the manuscript to see how he wrote each letter. It was such a pain and thus I decided to use a letter transcribed by Professor Jakacki. The mark-up process was so much better. It helped me a lot to better understand the letter and his writing style, and thus was very helpful for me to understand his experience during the war. 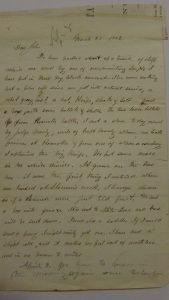 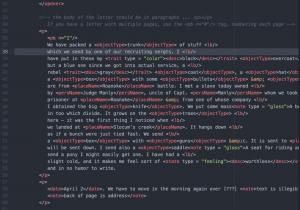 Being in the Archives changed my first impression on these manuscripts. When I first saw those digital manuscripts, the first word that came to my mind was messy, and I didn’t find their handwritings beautiful at all. However, when I actually got to hold the real letter, I was really surprised by the quality of Merrill’s handwriting. The texture of the paper was decent, and the cursive handwriting was extremely beautiful. I would be way less frustrated with the transcription  assignment if I was using the real letter. For me, the real letter is a lot cleaner and easier to read. However, it is not possible to give everyone access to all manuscripts. Therefore, digital copies are necessary to spread the information. If I did not have access to the paper copy, I will try to look for different versions of the digital copy online, since light and scanning technology can really affect the quality of a digital copy. 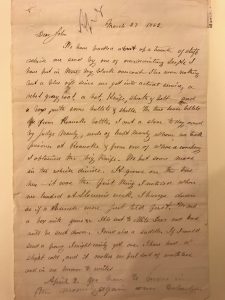 In Merrill’s letter, he mentioned that he had a cold which was affecting him a lot. While I was reading Merrill’s journal, I found that he caught the cold on the 25th, which is two days before he wrote the letter. The cold lasted for 4 days. In addition, I also noticed that when he was writing to himself, he included a lot more details than he wrote to others. For example, he mentioned the moss that he picked up when he first landed at Slocum creek in both the letter and his journal of the day. However, in the journal he included a lot more description about the moss, as well as the underlying meaning of this moss — his first encounter with the place.