After brainstorming for a bit during class, our team of three rejected the idea of developing a text-based Sherlock Holmes thriller. It was too cliché according to us, and after much thought, we decided on a game, central plot of which is based in a locked cabin. A player finds himself trapped inside a coffin, his hands handcuffed. Is this too dark for you already? Wait for it! He gets out of the coffin only to find his helpless friends across the transparent walls. The time has already begun, and if he does not act fast enough, his friends are going to die in the weirdest of ways. But what if he turns out to be a self-absorbed person? After a certain period of time, a dragon enters the cabin and eats him alive.

Initially, the player would need to move the coffin to find a key to unlock the handcuffs. Our team is figuring out the details of the story. This is where working collaboratively proves to be an advantage. Each one of us has read or watched related works, such as The Exam and the best-selling thriller And Then There Were None, which has helped us think about our plot right from the onset.

For further motivation, Tong is looking into existing room escape games on various platforms, such as mobile applications and web-based 3D games. Her critical thinking ability is greatly valued, and alongside Julia, she plans to sketch the storyline, set up puzzles, and determine the player’s superpowers, if any. As a Computer Science & Engineering major, my objective is to gauge the feasibility of our design, build a minimum viable product (MVP), and see if advanced features can be incorporated successfully. In addition, Julia will oversee our progress and critique the project as and when appropriate. I think our biggest challenge while working as a team would be finding time to meet, given that all three of us have packed schedules.

So far, our work resonates with the writing process of The Unknown in which the authors “began with a general scenario, but … there was little conscious agreement about how the plot(s) might proceed.” (Rettberg, S., Stories and Storytelling in the Digital Age, pg. 192) Nevertheless, we agree to review each other’s contribution to get a sense of the “context” before proposing any changes. As we look at other similar games, we try to decipher what designers of these games have encoded for their players. In the process, we may draw parallels with how we envision our game to function, and “in turn generate crossover fiction.” (Thomas, B., Harry Potter Fanfiction and Narrative as a Participatory Process, pg. 212) This is especially fascinating to me because we are acting as reviewers and authors (or designers) of texts simultaneously.

Our group project is a maze escape text game based on Python. We have come up with the general ideas and designing of the game. Since the setting of the game is in a maze which contains 10 different rooms, it is almost impossible to explain without a graph. 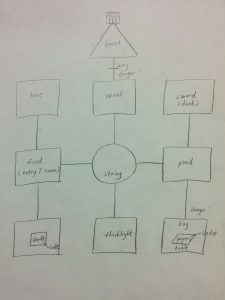 The protagonist would wake up in the center room at the start of the game. The player would be provided with some instructions at the beginning of the game, such as “The way to escape is in north”, and “Here is a list of verbals that you might use in this game: …”.  On this picture, there are useful items located in different rooms. For example, a key is needed for opening the door, while the key is locked in a locker which requires a code, and the code is written in a book where guarded by a dog. To reach the final destination, the player must utilize all the useful tools which can be found in different rooms. Before entering each room, a description or warning would appear on the screen, like “the room is completely dark” or “there comes the sound of a hungry dog”. There will be names and descriptions for each room on another drawing soon. To increase the difficulty of the game, there will be useless items and extra information as well. They would be shown on a third picture.

We have not yet come up with a complete background story for the game. But the fundamental logic is rather simple: you are trapped in a place with only limited food and you have to escape from there! You will win by escaping the door of the maze and lose by either eaten by the hungry dog or beast, fall into the river, or have no more food to consume. Our next plan is to write all the words that would appear in the user interface and design a block diagram which encodes all different states and changes of states based on user input. With these foundations, I believe we will write the program much faster! We think we should do most of the project together so that all of us three would get some knowledge and practical experience for all aspects of the project – designing, imagination, programming, and logic. However, since each group member is coming from different majors, each can focus more on his/her own favorite parts. Jingya is a CSE major and she likes and is good at programming, so we believe she can write more code in Python. Jake is an ECON major and hes is good at planning and communication, so it is reasonable that he will write more texts for the game. I am an EE major and I have taken some courses in block diagrams and state transitions, so I think I will be able to design the logic of the game. Since we are all from different background, we will enjoy even more benefits of working as a team besides sharing our ideas and reviewing each other’s work. There could also be challenges of working collaboratively, such as insisting on one’s own idea without concession or relying too much on other members.

Actually, before thinking about our own game, we all have played quite a few games on text games online. We got quite a bit inspiration from those games. Additionally, we evaluated each game we played and would try our best to learn from their strengths while avoiding their weaknesses. For example, some game descriptions were too general and we could not figure out which words we could actually use; some games were too easy that we would not want to play again once we figured out the strategies. Therefore, we would provide a list of possible vocabularies, extra information an items, and more than one way to win the game.

It is tempting to aim at fun and excitement as the goal of the game, but we could not forget the fundamental pursuits of literary gaming. According to Astrid Ensslin, literary gaming combines various techniques and game design to “explore the affordances and limitations of rules, challenges, risks, achievement-drivenness, and other ludic structures” (Literary Gaming: Introduction). Also, as we are going to publish our project onto the Internet, we have to be aware of our roles as authors of digital publication. The updating of our work would be like an ongoing conversation with the players and our game would be transparently evaluated by players of different tastes and skills (Bronwen Thomas, Harry Porter Fanfication and Narrative as a Participatory Process). Hence, it is important for us to be aware of our roles and aims of doing the project and not deviating from them.

Finally, having talked so much about text games, what on earth are they? Below is a game called Door that we played one Playfic, which we took some inspiration from. 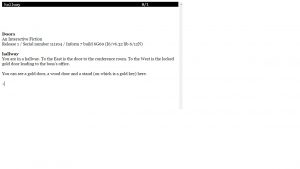 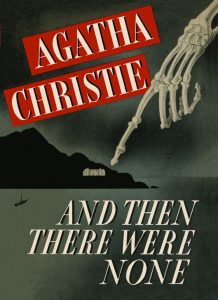